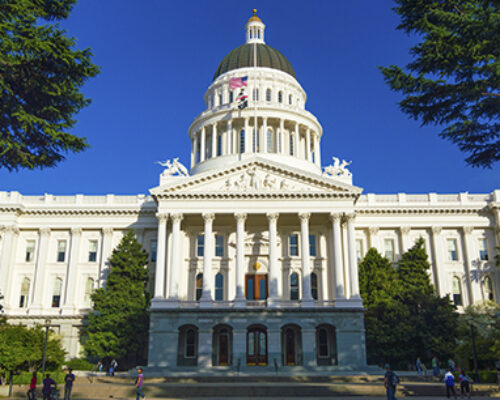 California state lawmakers wrapped up the first year of its two-year legislative session late Friday night, September 10. They passed a series of bills related to issues in the current fiscal year’s State Budget, which saw a staggering $75 billion surplus, thanks to federal aid and revenues from personal income tax and capital gains. Final actions on the budget represent agreements between the Governor and the Legislature in response to several high-profile issues such as wildfires, drought, and a continuing pandemic and housing affordability crisis.  $12 billion was included in the final budget for housing and homelessness, which included $100 million to CalHFA for homeownership/down payment assistance.  In the final housing trailer bill AB 175, notable language was also included to incentivize “innovative housing solutions,” which can include but not be limited to hotel conversions and “tiny homes.”

To address the critical need for improved housing affordability in California, Senate President Pro Tempore Toni G. Atkins (D-San Diego), along with colleagues Senators Anna Caballero (D-Salinas), Nancy Skinner (D-Berkeley), and Scott Wiener (D-San Francisco) announced a package of bills aimed at offering additional housing opportunities for Californians, including homeownership and “Missing Middle Housing”. This package included the following bills, all of which made it out of the Legislature except for SB 6 (Caballero), which is now a 2-year bill.

SB 7 reenacts AB 900 and adds: (1) eligibility for infill housing development projects with investments between $15 and $100 million (the previous threshold was $100 million and above); (2) a requirement of quantification and mitigation of the impacts of a project from the emissions of greenhouse gases with geographic restrictions for non-housing development projects; (3) a revision of labor-related requirements for projects undertaken by both public agencies and private entities, adding “skilled and trained” workforce to the existing prevailing wage requirements; and (4) authorization for the Governor to certify a project before the lead agency certifies the final EIR for the project and/or an alternative described in an EIR.  SB 7 requires an applicant for certification of a project to (1) demonstrate that they are preparing the administrative record concurrently with the administrative process; and (2) agree to pay the costs of both the trial court and court of appeal in hearing and deciding a case challenging a lead agency’s action on a certified project.

This bill moved swiftly through the legislative process with opposition only from the Judicial Council. However, it is important to note that this bill will become the second statute related to housing that requires a “skilled and trained workforce” requirement on specific developments utilizing streamlining incentives. SB 35 (2017) was the first, which created a ministerial approval process for specific projects and a CEQA exemption for projects within cities that lack compliance with the housing element law (RHNA).

SB 8 extends SB 330 (Skinner), which passed in 2019 and sunsets in 2030.  Since its implementation in January of 2020, SB 330 has expedited and facilitated affordable and market-rate construction by proving early vested rights, limiting ad hoc fee increases on housing projects, barring local governments from reducing the number of homes that can be built, and cutting the time it takes to obtain discretionary project approvals. In addition to the extension of the sunset, SB 8 closes many loopholes in the law that were identified during implementation, such as unintended consequences from the displacement provisions that were intended to protect existing low-income tenants. The bill passed overwhelmingly in both houses, despite steadfast opposition from the League of Cities.
,
SB 9 (Atkins) Housing development: approvals – Signed

SB 9 was considered the most controversial bill this session.  Despite the rhetoric and smear campaign by the opposition to instill fear in members of gentrification and the end of single-family zoning, the policy prevailed as something that can help bridge the racial equity wealth gap. It is also important to note that it would not have been passed through the Assembly without the support of the 7 republicans (vote threshold was 41 and it passed with 45 total votes).  This bill allows a homeowner to split their lot and construct a second unit on every property zoned for single-family homes in California OR convert their existing single-family home to a duplex.  By streamlining the process to split a lot or create a duplex bill, this bill allows for an increase in the amount of housing available in neighborhoods throughout the state.

SB 10 allows city councils and county boards of supervisors to override voter-approved ballot measures in exchange for higher-density housing. SB 10 passed the State Assembly with a 43-10 vote. This bills also allows cities to streamline the up-zoning of parcels near jobs and transit. By enabling cities to increase the density of these lots up to 10 units without triggering an environmental review, this bill makes it easier to build housing for young people and working families and it prevailed over the adamant opposition from NIMBY cities and community action groups.

Additional bills aimed at housing production sent to the Governor:

Would have created a systematic, statewide approach to gathering and analyzing data about the impact of state housing law. The Housing Data Act will require local governments to track and report when they approve a home, ensuring that state housing laws are having the intended impact.

Removes artificial floor area ratio barriers cities establish that have the effect of reducing the number of homes that can be legally built on a property.

AB 215 improves oversight and accountability for cities that are underperforming on housing production, including adding SB 8 to the list of housing laws that the Attorney General can enforce.

AB 602 increases impact fee transparency, and require impact fees to be proportional to the size of a new home so that smaller individual homes pay smaller fees.

Two-year bills include bills that were introduced this year but faced opposition or required more discussion amongst stakeholders before moving forward this year.  Additional details regarding the status of each bill can be found below.

If passed next year, would allow multi-family housing to be built on commercially zoned properties.

This bill raised significant concerns that it would weaken the enforceability of the Housing Accountability Act (HAA) by requiring certain challenges to proceed through the Office of Appeals prior to adjudication in court.

This measure would have prohibited a local government from imposing or enforcing a minimum parking requirement on developments located near public transit or within a low vehicle miles traveled area. It was held in appropriations committee and is dead for this legislative session.

On September 14th, the Governor claimed a victory in the recall election by a significant margin. The election delayed action on legislation already on his desk. With the results all but confirmed, we saw him signing hundreds of bills sent to him in the final week of session immediately following the election. It is also important to remind us that 2022 is an election year for the entire Assembly and several members of the Senate, as well as Governor Newsom.  The new district lines will be formally announced at the end of December and Lighthouse will provide a more thorough update on what to expect in 2022 at our Conference in November.