← Back to All In the News 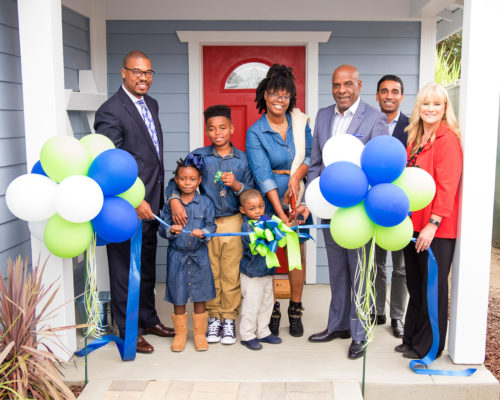 LOS ANGELES (Dec. 1, 2017)—Habitat for Humanity of Greater Los Angeles (Habitat LA) is pleased to announce the expansion of their service territory to encompass the San Fernando, Santa Clarita and Antelope valleys portions of Los Angeles County effective immediately. Recently, Habitat for Humanity International, the global organization’s headquarters office based in Atlanta, awarded Habitat LA the additional service area after the previous Habitat organization in the area announced it had merged with a veteran-focused nonprofit.

“We thank Habitat for Humanity International for entrusting us with this new territory and look forward to partnering with residents and leaders in this region to serve families and individuals in need of safe and affordable homes,” said Erin Rank, President & CEO, Habitat LA.

Habitat for Humanity International selected Habitat LA to expand its services to the communities of San Fernando, Santa Clarita and Antelope valleys based on Habitat LA’s strong track record of success serving the Greater Los Angeles region for the last 27 years. Having recently completed its 800th home, Habitat LA has been a leader and strong voice for affordable housing in Southern California, and has been a champion of building homes in partnership with families seeking a better life.

“Habitat LA is one of the nation’s leading affordable housing builders and advocates,” said Sue Henderson, Habitat for Humanity International’s Vice President, US and Canada. “We are excited that Habitat LA will grow its mission to San Fernando, Santa Clarita and Antelope valleys. With this new expansion, Habitat will be able to continue partnering with families in the area to turn their dreams of owning safe, decent and affordable homes a reality.”

Habitat LA’s expansion is effective immediately and they are now accepting applications for their Home Preservation Program, which offers home repairs to help alleviate health and safety issues for low-income homeowners. Simultaneously, they will begin looking for sites to develop new homes in the future and offering their Pathways to Homeownership program for interested residents. The organization will also be studying possible locations to expand their retail stores, called Habitat for Humanity ReStores.

To learn more about the Home Preservation Program, please visit www.habitatla.org/how-to-apply/home-repair-program/ or contact Jorge Leiva at (310) 323-4663 ext. 314. To partner with Habitat LA in other ways please contact us at www.habitatla.org or 310-323-4663.

About Habitat for Humanity of Greater Los Angeles

Habitat for Humanity of Greater Los Angeles (Habitat LA) brings people together to build homes, communities and hope. As the top nonprofit homebuilder in the greater Los Angeles area with six consecutive Charity Navigator 4-Star ratings, Habitat LA has partnered with volunteers, donors and Habitat homeowners to build, renovate and repair more than 1,300 homes locally and worldwide since 1990. The lives of thousands of individuals have been transformed as a result of having a decent and affordable place to call home. Habitat homeowners help build their own homes and pay an affordable mortgage. By supporting Habitat LA through volunteerism, donations and shopping in our ReStores, everyone can help families achieve the stability and self-reliance they need to build a better future. To learn more, visit www.habitatla.org.

About Habitat for Humanity International

Driven by the vision that everyone needs a decent place to live, Habitat for Humanity began in 1976 as a grassroots effort on a community farm in southern Georgia. The Christian housing organization has since grown to become a leading global nonprofit working in more than 1,300 communities throughout the U.S. and in more than 70 countries. Families and individuals in need of a hand up partner with Habitat for Humanity to build or improve a place they can call home. Habitat homeowners help build their own homes alongside volunteers and pay an affordable mortgage. Through financial support, volunteering or adding a voice to support affordable housing, everyone can help families achieve the strength, stability and self-reliance they need to build better lives for themselves. Through shelter, we empower. To learn more, visit habitat.org.