← Back to All In the News

Giving Back is a Favorite Holiday Tradition for this Habitat Family 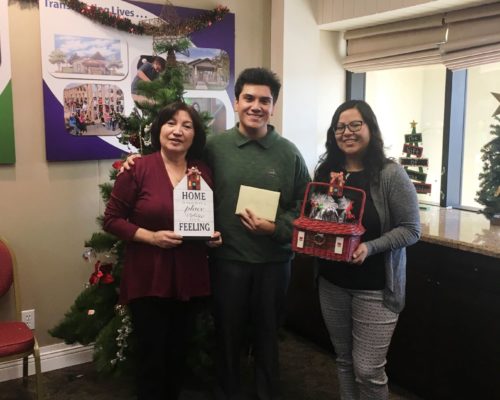 For many years, Luis and his mom Carla shared a bedroom in a tiny apartment. The apartment was too small and Luis wished for his own room – someplace where he could read or study.

Carla began saving to buy a home, but soon realized she wasn’t going to be able to afford a home in Orange County on her budget. After searching for help, she came across the Habitat for Humanity of Orange County program. She applied and was selected to purchase a two-bedroom home in Placentia. On December 16, 2006, Carla and Luis moved into their Habitat OC home that was built with the help of donors and volunteers.

“It was a dream come true,” Luis said. He had his own bedroom, and it was even decorated with cowboys and horses. “That first night, I felt secure and peaceful, and at home.” That got Luis thinking about other people. “I wanted other kids to have a house like mine,” he said. He decided to raise money for Habitat OC, so they could build more homes for kids like him.

A yard sale in his new yard seemed like a good idea. Luis donated many of his toys, and he made $57! Luis was so excited that he brought the money to the Habitat OC office the next day. But Luis didn’t stop there. Every year since 2006, Luis and his mother stop by the Habitat OC office on or near December 16, the same day they moved into their Habitat OC home, to bring their yearly donation.

Luis is currently attending college and majoring in Communications with a minor in Business. He’s not quite sure where his future will lead him, but one thing is for sure – he will continue to raise money to help Habitat OC build more homes for children like him.